It is well accepted and recognized that the rheological properties of adhesive blends can be satisfactorily correlated with PSA performances, such as tack, peel, and holding power, etc. Dahlquist was the first researcher establishing the rheological criterion for PSAs1. To be an appreciable PSA, an adhesive should possess one second creep compliance greater than 1×10-6 cm2/dyne. S. G. Chu further defines that a general purpose PSA should impart a G’ at 25°C less than 2×106 dyne/cm2, and a Tg (Tan δ maximum) ranging from -10 to +10°C 2. Based on these simple guidelines, one can then easily tailor PSA performances based on rheological criteria without proceeding lots of trial-and-error experiments.

In this study, three different mineral oils were selected to blend with various SBCs and tackifiers. They are a typical paraffinic oil (White oil #32, Shanghai Daliang Co.), a naphthenic oil (KN-4010, Karamay Petrochem Co.), and a unique synthetically naphthenic oil (Naphsol-200, Shanghai Dowpol Co.). SBCs and tackifiers used for this study are noted on the following tables.

Basic physical properties (viscosity and softening point) and PSA performances (180o peel, loop tack and holding power) tests were performed according to the PSTC and ASTM test methods. For rheological evaluations, all blended compounds were temperature scanned by a Rheometrics RDA-2 with an oscillatory frequency of 10 radians per second; a thickness of about 2.5mm on an 8 mm diameter parallel plates. Adhesive samples were all tested within their linear viscoelastic range.

Major physical properties and carbon species of used mineral oils are listed on Table 1. It is important to highlight that the carbon species of each mineral oil varies significantly. The %Cn of white oil #32, KN-4010, and Naphsol-200 are 30%, 51.7% and 92% respectively. The polarity and solubility parameter are related to %Cn (saturated cyclic carbon rings) in mineral oils. The higher the %Cn, the more polar the mineral oil is. Due to the polarity variation, each mineral oil demonstrates different compatibility with blended SBCs and tackifiers.

The rheological properties, G’ and Tan delta curves, of tested mineral oils are shown on Figure 1. It was found that the three neat mineral oils exhibited notably different transition temperatures (the inversion point at Tan delta curve). They were roughly -60°C, -35°C, and -25°C for White Oil #32, KN-4010, and Naphsol-200 respectively. Base on this fact, rheological properties of formulated HMPSAs will most likely be affected when different mineral oils are used in formulations. 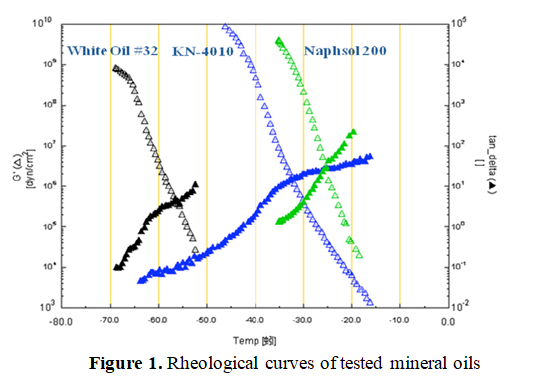 Mineral oils containing varied %Cn may cause different degrees of compatibility with both mid-block (rubber phase) and end-block (styrene plastic phase) of SBCs. Three commercially available SBCs were selected for this study. They were Vector 4411 (ExxonMobil SIS, USA), GP-3545 (LCY SBS, Taiwan), and YH-501 (Yueyang SEBS, China). Each SBC was blended with a fixed tackifier and three different mineral oils using a reference weight ratio. Basic physical properties (viscosity and softening point), PSA performances (tack, peel, and hold), and rheological properties were evaluated. The correlation of PSA performances to the rheological properties are emphasized for three kinds of SBC-based formulations

Three SIS-based formulations containing various mineral oils are list on Table 2. Both viscosity and softening point were slightly different while PSA performances varied notably for three formulations. Both 180o peel and holding power boosted as the %Cn of mineral oil rose. Loop tack advanced to a certain level and then inversed as the %Cn of mineral oil increased. Once again, these PSA performance variations are closely related to the rheological property of each formulation.

Rheological properties of three SIS-based HMPSAs are shown on Figure 2. It was observed that both Tg value (temperature at Tan delta maximum) and G’ curve at glass transition and plateau regions were higher for formulations containing mineral oil with more %Cn. For compatible polymer-diluents systems, the Tg of a blend can be predicted by the Flory-Fox equation. A mineral oil with higher Tg (i.e. containing more %Cn) will certainly result in a blend with a higher Tg. However, the higher polarity (i.e. more %Cn) mineral oil is less compatible with the isoprene rubber phase of SIS and therefore causes a high G’ curve at rubbery plateau region. This phenomenon can be explained by the deGennes’ equation.

Tgi = Tg (oK) for the individual component i

Wi = Weight fraction of component i

where Gnoo is the Gno of the neat polymer

v2 is the volume fraction of polymer 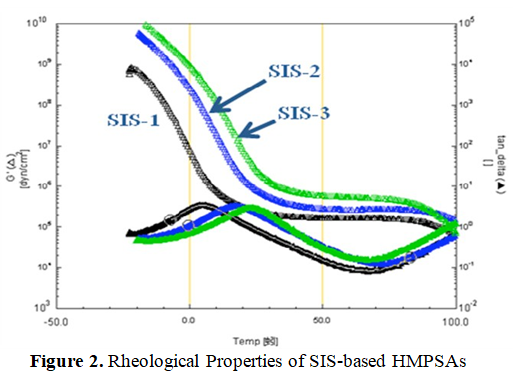 For both peel and holding power measurements, test specimens were taped onto standard stainless steel test panels with a two pound rubber roller running back and forth once each direction. Peel and holding power are raised with the increase of Tg values. For peeling test, this result can be correlated with the value of Tan delta (damping factor) at the de-bonding stage3. A higher Tan delta value reflects a longer peeling leg or a greater elongation at the peeling front and will result in a higher peel force. For a holding power test, once the test specimen is successfully and intimately bonded on the test panel by the roller, the higher the G’ value upon shearing deformation, the stronger the cohesion is and the longer the holding time is. This correlation, however, may not be true when the adhesive’s Tg and G’ at 25°C are too high to successfully and intimately bond onto the test panel with a two pound roller.

No additional force other than the weight of test specimen was applied for a loop tack test. When a Tan delta value of a PSA is higher while G’ remaining at the rubbery plateau region below 2E6 dyne/cm2 at the bonding condition, the adhesive is able to wet the test panel better and generates a larger contact surface without additional pressure. Upon the observation on the peel separation after one second contact time, the higher Tan delta value associates to a longer peeling leg and a higher tack value. However, when the Tg of a PSA is too high while G’ at 25°C (or a specific test temperature) appears at the glass transition zone, since it is outside of Dalhquist criterion, the contact area is thus diminished as the Tg is raised. Loop tack value is therefore lowered dramatically after the Tg reaches a certain high value. In the SIS-based formulations, we found that an inverse of holding power for SIS-3. This is because the high Tg (23.5°C) accompanied with high G’ at 25°C (2.5E6 dyne/cm2) of SIS-3 makes it hard to wet onto the test panel intimately at short period of time and consequently results in a lower holding power. 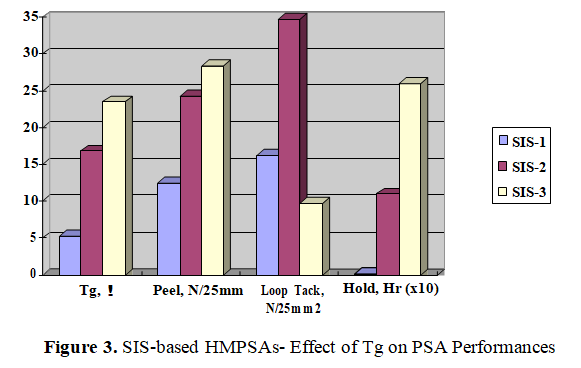 Most commercially available SBS’ are inherently not easy to formulate into general purpose HMPSAs because of the lack of SB di-block. A SBS containing high amount of di-block was chosen for this study. Three SBS-based HMPSAs were prepared for the purpose of understanding the effect of mineral oils on SBS-based HMPSAs. Basic physical properties and PSA performances are listed on Table 4. Similar to those results observed in the SIS-based HMPSAs, the higher the %Cn of mineral oil was used in the formulations, the superior the peel, loop tack and holding power were with an exception of the tack performance of SBS-3. This outcome again can be easily explained and associated by their rheological properties.

The correlations of SBS-based HMPSA performances to the rheological properties are presented on Figure 5. Both peel and holding power move up as the Tg of formulation raises. The inverse of loop tack for SBS-3 is resulted from high Tg (24.8°C) and high G’ at 25°C (2.3E6 dyne/cm2). 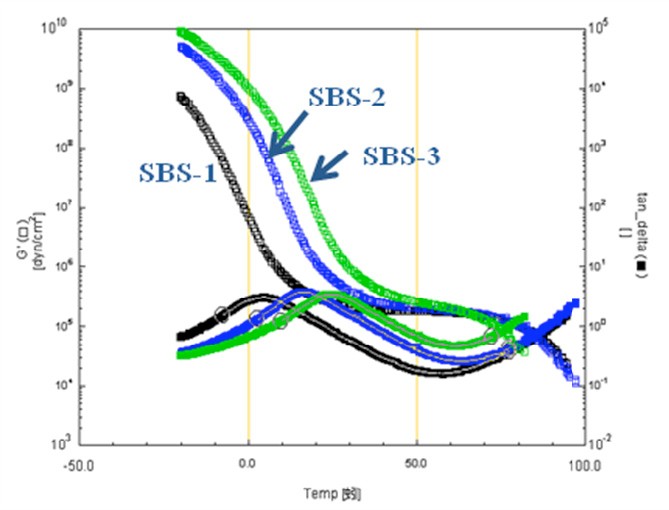 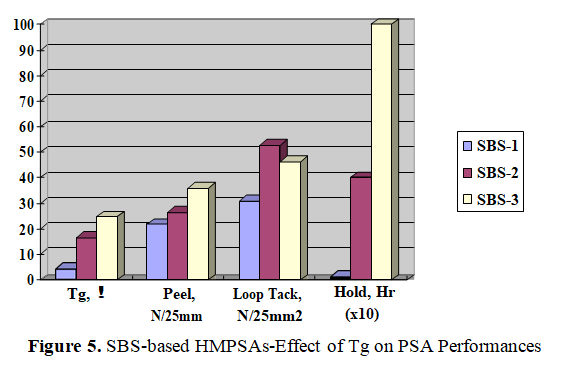 Rheological properties of these formulations are shown on Figure 6 and Table 7. As expected, the Tg of formulated blends increased when a high %Cn mineral oil was used. Rubbery plateau moduli are essentially the same for three formulations containing various %Cn. This feature, as discussed above, implies that three mineral oils and ethylene-butylene rubber phase of SEBS have similar compatibilities. 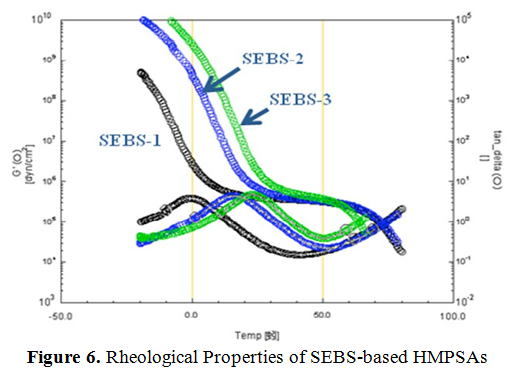 Just like those correlations revealed for both SIS and SBS-based HMPSAs, the PSA performances correlated very well with the Tg of SEBS-based HMPSA formulations (Figure 7). Both peel and holding power improved significantly as the Tg increased. Loop tack basically followed the same correlation very well till the Tg (23.1°C) and G’ at 25°C (1.8E6 dyne/cm2) reached the limit of the PSA rheological criteria. 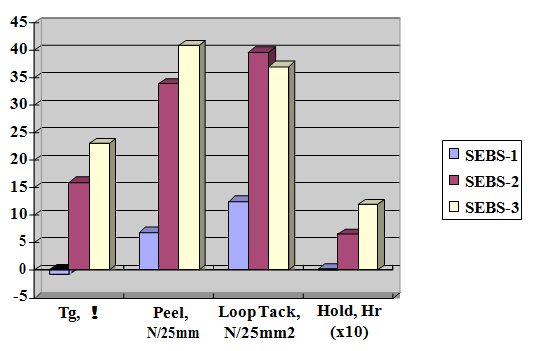 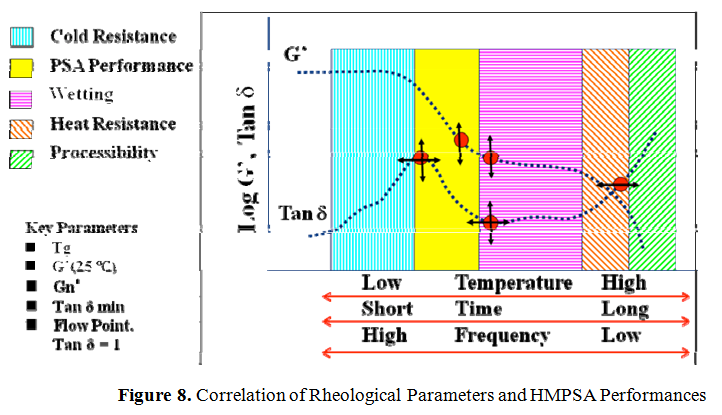 The effect of mineral oil on Tg of varied SBC-based HMPSAs is shown on Figure 9. Regardless of the type of SBC evaluated, mineral oils containing more %Cn always increased the Tg of the blended formulations. This feature will certainly affect room temperature PSA performances as discussed previously. 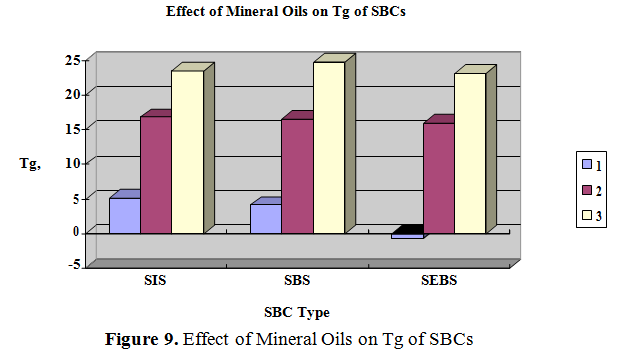 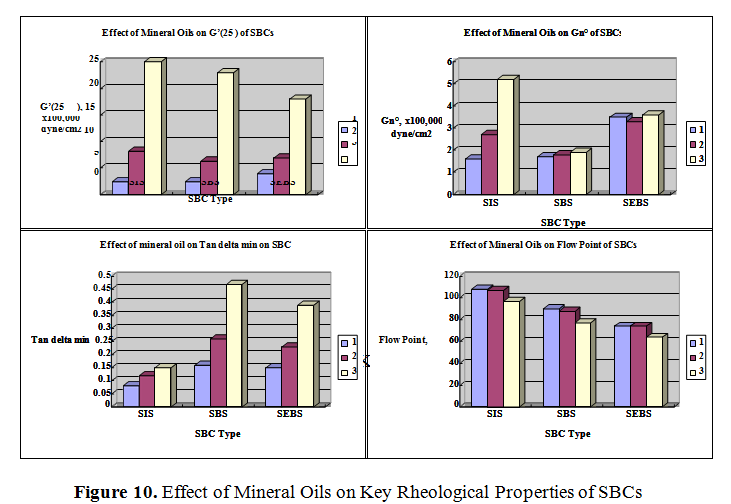 Three important findings are concluded from this study.

Based on above findings, in addition to selecting appropriate SBCs and tackifiers, mineral oil also provides an alternative formulating route for developing desired HMPSA formulations. 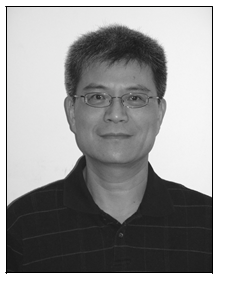 Tom Tsaur is an independent technical consultant for hot melt adhesives. Prior to his consulting career, he founded two hot melt plants at Taiwan and Shanghai, China during 1994 and 2001 respectively. Before returning to Taiwan for his own business, he used to work with Arizona Chemical Company and NSC (Henkel) in the US. He actively participates in both US and Asian adhesive technical conferences. He made three consecutive presentations to TAPPI Hot Melt Symposium in 2002, 2003 and 2004; two presentations to 2004 WAC-Beijing, 2008 WAC-Miami, Florida USA and several speeches to Asia, Chinese and Taiwanese adhesive conferences. He also serves as an advisor for the China Adhesives Industry Association.

He can be reached at rheotsaur02@hotmail.com. 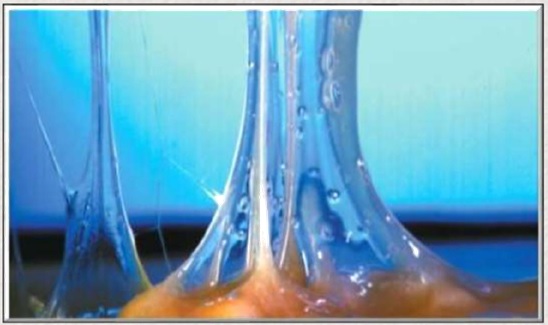 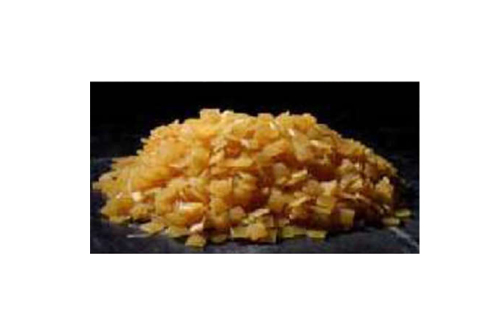